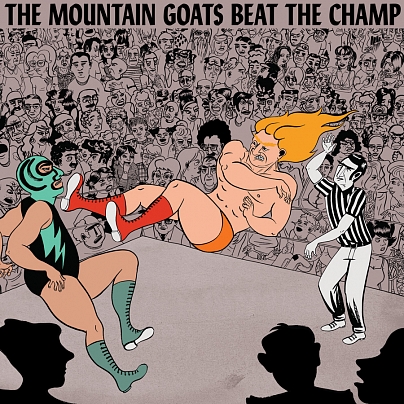 The Mountain Goats return this spring with Beat The Champ, which, according to Mountain Goats main man John Darnielle, consists of 12 songs about wrestling. Of course, many of the songs may simply be using wrestling as a metaphor for various kinds of struggles. Then again, maybe not. He could just be following in the footsteps of noted musicians/wrestling marks like Bob Mould and/or Billy Corgan. Or Insane Clown Posse.

Beat The Champ comes out April 7, (via Merge: pre-order) and is available on CD, standard double-LP, and deluxe double-LP. The deluxe version will be pressed on limited-edition colored vinyl (gold and green) and include a bonus red vinyl 12-inch that features the non-album track “Blood Capsules” and a dub version of the same song on the B-side. Both the standard and deluxe LPs include a coupon for a full album download.