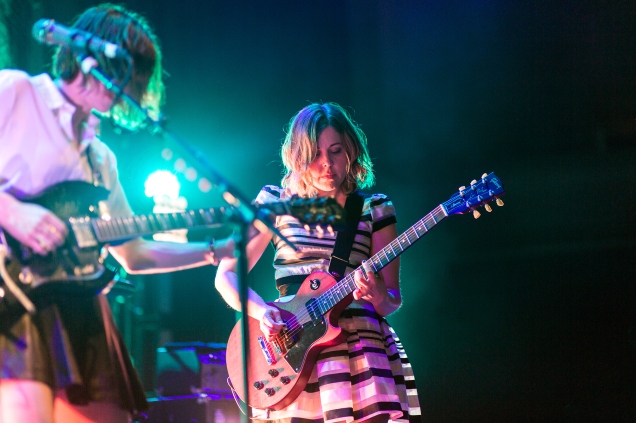 The reunited Sleater-Kinney hit San Francisco for the first of two sold-out nights at the Masonic, on Saturday, May 2nd. “Don’t tell Portland, but this is this the first city we fell for,” singer/guitarist Corin Tucker told the crowd. Perhaps it was their affinity for the city, or just to mix things up after being on the road for a few months already, but SF got a more varied setlist than what the band had been trotting out lately, with a few more oldies-but-greaties thrown in. Not surprisingly, the die-hard crowd went nuts upon the first notes of “Little Babies” early on in the set.

Speaking of those oldies… It’s notable that upon their return, SK had a new album ready to go, and were outspoken about the fact that this wasn’t a nostalgia tour. They were back because they had more to say, they claimed, and the album and accompanying tour wouldn’t just be a ten-years-later victory lap. The album, No Cities To Love, has lived up to that promise, and the tour is shaping up that way as well.

The band sound more vital, energetic and muscular than they did 10 years ago, and though they’ve added multi-instrumental touring member Katie Harkin, it’s not the extra personnel that’s responsible for the change. Sleater-Kinney have always sounded a band of the moment (or really, slightly ahead of the moment), and this is the Sleater-Kinney we get specific to 2015. And that’s why those oldies, as great as they are, sounded somehow incongruous with present-day Sleater-Kinney. It’s a testament to their enduring relevance that, thrown in with their contemporary, more outward-looking tunes, the dance pop of “Little Babies” (one of their best best songs from maybe their most important record) was the one time that the show did feel like a nostalgia tour. As great as “Little Babies, “I Wanna Be Your Joey Ramone,” and “Dig Me Out” still are, Sleater-Kinney could’ve made a setlist from songs from just their last two or three records and it would’ve been a pretty cohesive, career-highlighting set. (Speaking of “I Wanna Be Your Joey Ramone,” if there was any doubt where Sleater-Kinney come down on the Sonic Youth break-up, Thurston Moore has been excised from the song, with the line now going “I wanna be your Kim Gordon.”)

While No Cities to Love sounds like the natural progression from One Beat and The Woods, most of the pre-All Hands on the Bad One songs are starting to show their age. And that’s mostly because Sleater-Kinney themselves are not. Sleater-Kinney, as a band, may have taken ten years off, but the individual members have remained quite busy, and their individual evolution and progress shows through in this current incarnation of Sleater-Kinney. Drummer Janet Weiss seems to get stronger and steadier with every passing year, and somehow Tucker seems revitalized and more assertive while at the same time Carrie Brownstein seems more comfortable taking the lead than she ever has before. Sleater-Kinney in 2015 is a lean, well-oiled machine, but one that hasn’t lost any of its jagged edges. They never official broke up (calling it an “indefinite hiatus” instead), and fittingly this feels less like a “reunion” and more of a “resumption.”

Pics and setlist below…

Price Tag
Fangless
Oh!
What’s Mine Is Yours
Ironclad
Little Babies
A New Wave
No Anthems
All Hands on the Bad One
Surface Envy
No Cities to Love
One Beat
Bury Our Friends
Youth Decay
The Fox
Words and Guitar
Entertain
Jumpers
Encore:
Gimme Love
I Wanna Be Your Joey Ramone
Dig Me Out
Let’s Call It Love
Modern Girl 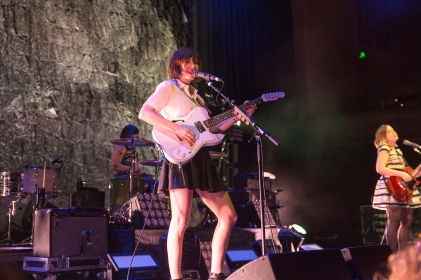 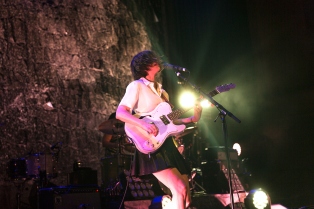 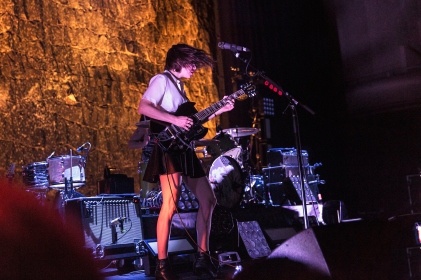 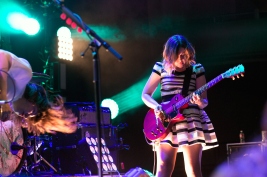 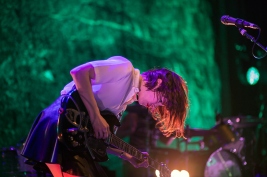 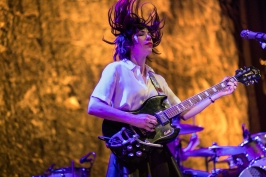