Indie rock vet Mary Timony dusted off songs from her beloved, long-defunct ’90s band Helium last year for a short East Coast tour, behind the Matador Records’ reissue of the band’s two LPs and a new 2-LP, 19 song singles & rarities compilation. And after a short break, she brought the tour out west. Backed by members of the band Hospitality, the prog-rock-leaning Helium songs got a dose of Timony’s latter-day penchant for fun guitar-rock heroics that really came out during her time with supergroup Wild Flag and her current band, Ex Hex. The result was the best of past and present, and the two-guitar lineup really let Timony’s guitar chops shine, reminding/informing the crowd that she’s been one of the best rock guitarist of the past two decades. You won’t see Eddie Van Halen do his two-finger guitar tapping while also singing. 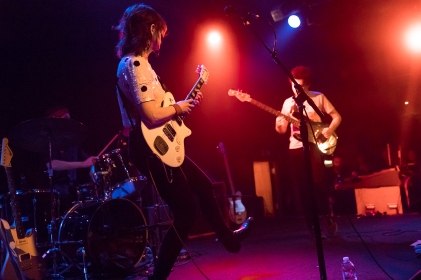